I’ve mentioned before that as a child, I couldn’t wait to be an adult. And, as an adult, I never look back on childhood with wistfulness. Mostly, I’m just glad it’s over, because childhood can be traumatic. I was recently listening to a collection of past interviews that Fresh Air host Terry Gross did with author Maurice Sendak. Terry dedicated her show to Maurice on May 8 in honor of his passing. In a 1986 interview, Maurice answered a question from Terry about his childhood feelings toward adults. Here’s what he said:

“I mean they were mostly dreadful, and if the option were to become an adult was to become another dreadful creature, then best not, although I think there had to be a kind of normal anticipation of that moment happening because being a child was even worse. I mean, being a child was being a creature without power, without pocket money, without escape routes of any kind. So I didn’t want to be a child.”

I don’t relate to Maurice’s fear of adults, but I can understand his desire to leave childhood behind. However, there are many people who don’t agree with us – BE included. BE has told me many times that she likes to be little and doesn’t want to grow up. Although BE might idolize Peter Pan and his inability to grow old, I think Maurice and I find the whole idea very unfortunate. Here’ s what Maurice had to say:

“When I was a small boy, I was taken to see a version of ‘Peter Pan.’ I detested it. I mean the sentimental idea that anybody would want to remain a boy, I don’t – I couldn’t have thought it out then, but I did later, certainly, that this was a conceit that could only occur in the mind of a very sentimental writer, that any child would want to remain in childhood. It’s not possible. The wish is to get out.”

Thankfully, I made it out, and obviously BE will too. I just hope that by the time it happens, she’ll be ready. 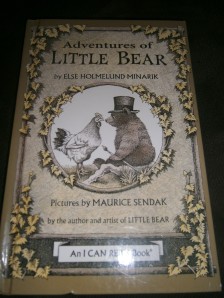