Over the weekend, I had the opportunity to do something most adoptive parents never get to do: I went to my kids’ foster home. For a year and half, BE and BC lived with the L family, not too far from where we live now. We’ve been fortunate enough to keep in touch with the Ls all these years, and one of the kids’ foster sisters recently invited us to a birthday party for her 1-year-old daughter.

I was ecstatic to see where the kids lived and I took a lot of photos of the house and the rooms. I did take photos of the kids with their four foster sisters and foster parents too.

I was fascinated by the people who were at the party. A good number of guests were former foster children themselves, now grown up with children of their own. The L family has been doing foster care for more than 20 years, and CL, the foster mother, estimates that she has had more than 100 foster children. I would love to interview her for this blog someday – the whole family is so unique that I just want to capture their perspective on family and life in general. Hopefully I’ll have a post on this in the future.

There were so many emotional moments for me during the party. I just felt so thankful that my kids had such a great family to take care of them. CL and I got emotional as she remembered rocking and feeding Brendan – she was pretty much his first mother. We’re so fortunate that we’re still in touch with the Ls and that the kids have such a large family of people who love them (including members of their first family of course). 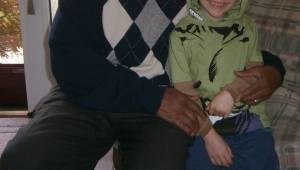 BC and his foster dad

One thought on “A Rare Opportunity”